The Royal Wedding – a sustainable event? 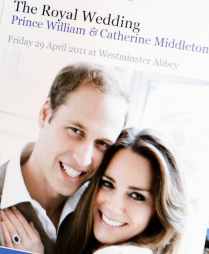 When Kate and Will tied the knot last month, it was a family wedding, a production of The Firm and an international public-and-broadcast event all rolled into one. What interests me most about the Royal Wedding are the associated social and environmental considerations. With all the royals, politicians and dignitaries flying into London from all over the world, not to mention the estimated 600,000 tourists, it certainly had a huge carbon footprint – and I wonder how many folks thought to offset their flights. It would be a significant first if Kate and Will produced a sustainably report on their wedding, but I think we’ll have to be satisfied with the kiss of hope on the balcony.

However they did make some progressive choices. In lieu of gifts, the Duke and Duchess of Cambridge set up a charitable gift fund. I would love to see a final tally of the impact of this decision alone. They also chose local seasonal wedding flowers and local, mostly organic food for the receptions. They left Buckingham Palace in an Aston Martin DB6 that ran on E85 bioethanol, made from English wine wastage. I suppose we can count the horse-drawn carriages as low-carbon too. In addition, the tiara was borrowed and the ring, recycled.

Speaking of rings, we had our own five-ring international public-and-broadcast sporting event in Vancouver just over a year ago. I was honoured to be a sustainability consultant to the 2010 Vancouver Olympic and Paralympic Games (VANOC). For the record, VANOC produced five public sustainability reports on the impact of the Games. Vancouver’s were the first Olympics Games to produce reports that considered the social, as well as the environmental, impacts and benefits of the Games. Now I congratulate David Stubbs, and our colleagues at London 2012, for the release of their first sustainability report.

VANOC also helped develop a Sustainable Sport and Event Toolkit which paved the way for a Canadian Standards Association (CSA) standard for sustainable events, the Z2010. This project was led by Ann Duffy, the Corporate Sustainability Officer at VANOC and now President of The Ann Duffy Group. As a member of the Technical Committee on Sustainable Events for the CSA, I used my VANOC experience to help identify the key impacts of an event in all its phases including planning, execution, communication and reporting. Each step requires active consideration of the ethical, social, environmental and economic impacts and opportunities. For one thing, this helps to define where you can make an impact – as Kate and Will did by rerouting a deluge of wedding gifts to a charitable fund. (Of course there’s always the question “Why have the event at all?” How about a nice small-footprint elopement? But that’s another discussion…)

The CSA standard acts as a “checklist” for event managers who want to improve their sustainability performance. It also helps to validate sustainability claims. The 2011 JUNO Awards and events hosted in February by the Canadian Academy of Recording Arts and Sciences, was the first Canadian organization to use these standards.

For organizations that host smaller meetings and events, another client, The Co-operators Insurance Group, released its “Guide to Sustainable Meetings” last month. I was a principal researcher and contributing author of this report, which primarily looks at how to manage the environmental impacts of meetings and conferences. According to research summarized in the “Green Meeting Toolkit” of the Professional Convention Management Association, the average conference delegate produces 61 pounds of solid waste during a three-day conference (the equivalent of two large garbage bags of trash); uses 262 gallons of water per day versus about 86 gallons per day at home; and produces 1,418 pounds of GHGs – about the same as operating a car for one year. So extrapolate those figures to 600,000 tourists visiting London for a royal wedding or an Olympic Games. You don’t have to be a math whiz to realize the potential gain of sustainable event planning – not just to reduce negative impacts but also to generate benefits.

Now we just have to get party-planner Pippa Middleton on side. Fairtrade tea anyone?

Browse blog posts by category below, or return to the main blog page to search or browse by keyword.

Coro Strandberg works with businesses, government and industry associations to envision and innovate a sustainable future. Coro is an expert on sustainability leadership and transformational business practices and relationships. She believes sustainable business changes everything for the better.

Get Coro's biography and media materials

Coro on Twitter
© 2022 Strandberg Consulting - Solutions for a Sustainable World